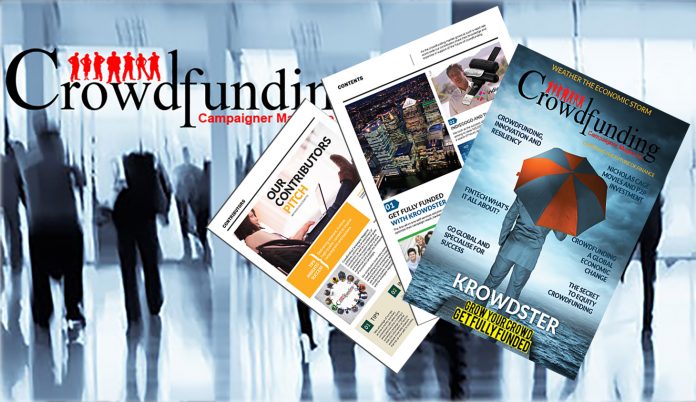 The Crowdfunding Campaigner Magazine platform supports campaigners and investors to come together to share experiences, get ahead of their game and engage with one another. Our platform is about facilitating thought leadership – by gathering experiences from the people who make decisions at the various levels to improve and guide in delivering successful projects. The platform provides a unique way for crowdfunding to be viewed on a global basis and encourage a way of shaping the future of the rapidly growing financial sector.

Crowdfunding is a relatively new method of funding for all types of projects, new products and causes. This amazing new funding medium helps people to raise money via the Internet from a large group of individuals worldwide. Money can be raised for numerous reasons, including an experience, a service, developing a new product, a special project, investment, or a cause. There are three types of participants involved in crowdfunding and they are an initiator, companies or individuals who donate to the initiator’s campaign, and a platform like Kickstarter, Crowdcube, or Indiegogo, for example, where parties are joined together for funding purposes.

Many products have been launched in recent years thanks to crowdfunding. They include new advances in technology to every product under the sun. People have raised campaign dollars ranging from a small percentage of their initial goal to way beyond. One product called “Sprayable Sleep” had a goal of $15,000 and has raised to date $192,459 on Indiegogo. Another campaign to fund a movie has raised over three million dollars to date on Indiegogo and is in high demand.

Now, a May 2014 report entitled “The State of the Crowdfunding Nation” from The Crowdfunding Centre based in the UK contained data that showed that, during the month of March, $60,000 or more was raised every hour using crowdfunding worldwide. In addition, their data also showed 442 global crowdfunding campaigns being launched daily during the same month.

Crowdfunding has literally exploded with thousands of everyday people funding products, companies and even movies. In only five years, the crowdfunding industry has grown 1000 percent. At that rate, by 2020 crowdfunding could be responsible for $500 billion in funding annually. And, with an astounding average growth rate of 74 percent annually, it’s definitely not showing any signs of slowing down.

FinTech the Future of Finance